Obama spent almost $6 trillion and now expects us to pay for it – to the tune of $ 1.6 trillion in NEW TAXES.

Here is the calculation for the numbers above:

Total Amount of Taxpayers in 2009 (when Obama took office)
In “Statistics of Income—2009 Individual Income Tax Returns (page 21),” which was published this year and is the Internal Revenue Service’s most recent statistical report on individual income tax data, the IRS reported that there were 81,890,189 tax returns filed in 2009 that reported taxable income.

It is time to wake up America. It’s time to end the two party system. Its time for liberty!

Do You Want To Help Spread the Message Of Liberty?
The changes we want to see have to come from us, the people but this cannot happen until people understand the issues. These shirts are a great way to get them to question the current paradigm and hopefully research certain topics.Let’s spread the message of liberty near and far! If anyone has any ideas for shirts, bumper stickers etc please let me know.

Click HERE to see what we have to offer: 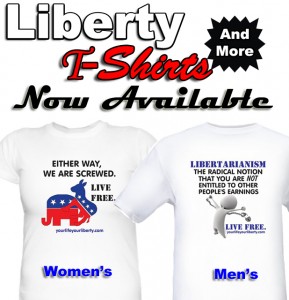