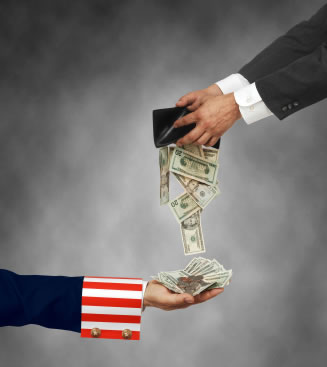 But what they never tell you is how much of your income you are paying to the  government. The numbers below are average percentages Americans pay in taxes:

Theft and Extortion
Theft is defined as “the taking of another person’s property without that person’s permission or consent with the intent to deprive the rightful owner of it.” I never gave my consent for the government to take my money. Did you?

Extortion is defined as “a criminal offence of unlawfully obtaining money, property, or services from a person, entity, or institution, through coercion.” We must pay this money or else we will eventually find a gun pointed at our heads and then we will be thrown in prison.

Our government obtains money through theft, force and coercion – a criminal offense.  If any person behaved in such a manner, they would be thrown in prison. But somehow we condone this when it is done by our government. One of the reasons is because many people do not realize how much they are actually paying because they never see the total. When we fill our gas tanks, we complain so much about it because we see how much we are paying. But some “feel good about paying it” and feel that “everyone has a responsibility to pay it.” They condone the use of violence and theft because “we need it for society” or for “those who have less than us.” These people are compassionate souls who genuinely care about others. They want peace in the world and reject the notion of violence. The problem is that they do not actually realize what they are actually doing – using a third party to forcefully impose their will on others. This is exactly the opposite of what they claim to believe in. How is it then, that most people do not realize they are both living in and supporting a society based on violence, force and coercion?

“Conformity is the Jailer of Freedom and the Enemy of Growth”
We have been brainwashed from an early age in our educational system to obey authority, blend in and conform.  We simply accept the paradigm that we are raised in and do not ask questions. Our educational system does not inform us on crucial concepts every American needs to be well versed in: the origins of money, the Federal Reserve System, fractional reserve banking, taxes, inflation, Keynesian economics and more. Our public schools do not educate our children, they train them. Training is simply about building a set of skills and following a set protocol. Education teaches how to learn to think, on building the mind.  We become accustomed to receiving information from an authority and are not taught to think critically or to question the information that we are presented with. Questioning “the teachers” is inappropriate, disrespectful and completely unacceptable.

This is why we so easily accept, without question, the information we see in the mainstream media; on the television networks, cable channels, movie studios, newspapers, magazines, publishing houses, music labels and many of our favorite websites. Accepting information from an authority without question was part of our “education.” Many Americans are not aware that the mainstream media is now controlled by just 6 corporations who’s agenda is to serve corporate interests and obtain high ratings, instead of providing factual, balanced reporting (please see my video on media bias here).

These gigantic media corporations are not going to do anything to threaten their relationships with their biggest advertisers. They have a huge incentive to also keep the status quo. The most important topics like fractional reserve banking, our interventionist foreign policy, our debt-based monetary system or our fiat currency are never discussed. The television continues the cycle of indoctrination into a fear based society, where we accept our president killing people from thousands of miles away, who have never been convicted of anything, with flying drones. We live in such disconnect and fear that we do not protest our government being the policeman of the world by having 900 military bases in over 140 different countries.

Government and large corporations share the same incentive –  to keep the status quo, which serves to maintain their power. According to the supreme court, corporations have the same rights as people and money is free speech. It used to be against the law for a corporation to contribute to a political party. Now these corporations spend more on lobbyists than they pay in taxes. Our presidents are elected by the big banks and large corporations instead of the American people. This is the loose definition of fascism. We do not see the destructive forces of fascism and totalitarianism at work, because it is never discussed in the mainstream media.

A New Paradigm
If you reject the notion of living in a society based on fear, you are not alone. People are “waking up.” A new paradigm is beginning to emerge and it is called the liberty movement. Millions of people across the country have embraced the ideals of a society that is based on voluntary mutual consent, instead of violence and coercion. But we need help in spreading its message and educating others. I invite you to join myself and millions of others in spreading the wonderful message of liberty which is based on the principle of non-aggression. To learn more, watch the videos below. 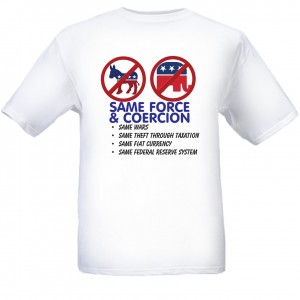