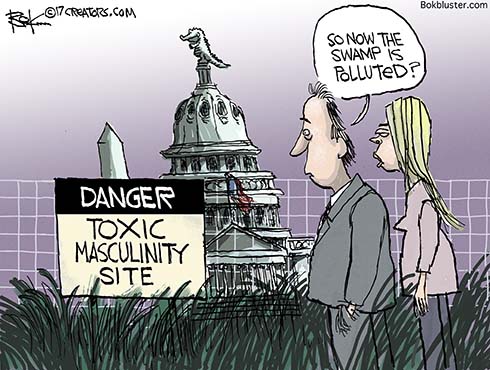 “Men oppressed woman throughout most of history.”

This is what has been taught for decades at many of the schools and universities.

When I think back on how difficult it was coming of age, wrestling with feelings of not fitting in, insecurities, feelings of shame, of not being good enough, anxiety from a very turbulent home environment, not feeling comfortable in my own skin. I cannot imagine dealing with the additional burden of receiving a message repeatedly that I come from a long line of oppressors and should be ashamed of that lineage.

Imagine growing up in a time when on top of this, you are told that rape is so prevalent in our society that sexual violence against women is completely normalized. In other words, you are the potential manifestation of this “rape culture”.

If that is not enough, if you happen to be a white male (the eternal sin), you will be constantly reminded of all the terrible atrocities that your forbearers committed.

Like most boys growing up, I had an innate drive for aggression. Yet, because of the rage I experienced from my father, I kept it inside, not wanting to be like him. I saw boys around me using these biological drives to test themselves against their limits. They excelled socially, academically and physically. I always admired these boys and so did everyone else; they were the most popular kids at school. Now as an adult, I can see that those drives were channeled toward building themselves and eventually used to create a family and protect those around them.

But today, we are told these drives or ambitions are part of a “tyrannical impulse” and must be rooted out or greatly minimized. Hence, the popular term – “toxic masculinity”. It was bound to happen, considering everything I have just mentioned. Just lump em all together, all 4 billion men.

This is seen not only as acceptable, but to have these views is a form of compassion and being extremely virtuous. This narrative has become so pervasive and acceptable, that it recently inspired Gillette to make a commercial condemning their own customer base and their “toxic masculinity”. Corporations are always last to pick-up on the social narratives, so by the time you see it on television, you know its permeated every aspect of our society. At the end of the ad, Gillette shows us there is a glimmer of hope for the majority of us toxic males (“The Best Men Can Be”). You see, a few good men (the majority minorities and people of color),  have “awoken” to their toxic nature and they are shown correcting the behavior of their toxic white male counterparts. This is from a company that makes razors for men.

Here it is, in all its pandering glory:

Seeing this ad for the first time was almost an out-of-body experience for me. The zombified row of men at the grill reminded me a lot of Nazi propaganda that I learned about in Jewish day school. It is a chilling and terrifying look at the culmination of a society that has gone backwards, one in which group identity has become paramount and individuality almost non-existent. The only respite I had after watching it, was seeing the 1.3 million dis-likes and reading the barrage of negative comments from both men and women who overwhelmingly condemned it.

I was aware enough to know that I was sensitive to these issues, considering my experience growing up as a man and struggling to find my place in the world. It was hard enough for me back then and it was hard for me to image having all of these terrible extra societal narratives about me. But I knew that with such a pervasive and prevalent message,  this must be affecting young boys – so I started doing my own research.

What I learned shocked me to the core.

I learned that worldwide, boys are 50 percent less likely than girls to meet basic proficiency in reading, math, and science. As boys become young men, their suicide rates go from equal to girls to six times that of young women. Boys are growing up with less-involved fathers. Boys are more likely to drop out of school, drink, do drugs, become delinquent, and end up in prison. Boys’ old sense of purpose—being a warrior, a leader, or a sole breadwinner—are fading. Many bright boys are experiencing a “purpose void,” feeling alienated, withdrawn, and addicted to immediate gratification.

We know one of the major factors that is causing all of this is fatherless households. In the United States today, there are 20 million children, more than 1 in 4, that live without a father in the home. This begs another question. Why? How did this happen?

This lead to me to researching what was happening to men in general. Could this be one of the major factors contributing to millions of fatherless households? Was decades of hearing that men were unnecessary, ineffective, and often times predatory, actually having real world effects? What I discovered was that this was a crises of epidemic proportions, that no one was talking about. This a major problem and yet it was absolutely nowhere to be found in the mainstream media. It was really quite astonishing. The only substantive piece I could find was in Tucker Carlson’s series, “Men in America”.

Men are told that the heritage to which they belong is regarded as an “oppressive patriarchy”.  They are made out to be the potential manifestation of “rape culture” and told they are part of “toxic masculinity” and their competitive drives or ambitions are regarded as part of a “tyrannical impulse”. With this horrendous view, how are men supposed to move forward in the world with confidence and take their place in the world? Why in the world would they shoulder this terrible burden? And this is exactly what is happening as many men feel totally demoralized and are simply stepping aside and retreating.

The other media I discovered was a groundbreaking documentary called “The Red Pill”, made by a feminist filmmaker of all things. The film was supposed to expose the patriarchal and misogynistic world of the Men’s Rights Movement, but what she discovered was quite the opposite – all the ways in which men were silently suffering. The film asks the audience to explore their own level of compassion for men and boys and expertly challenges the accepted narrative of the gender divide that so many still feel a need to desperately cling to.

The film moved me to the core. I cried several times simply from relief, knowing that this was real and someone had the guts to actually make a film about it. Yet unbelievably, the documentary was actually banned in several places and unsurprisingly, received nothing but scorn, hatred and terrible reviews from the same media who tells us that it is men that are the problem. All I can say is thank you Cassie Jaye.

Today, people are saying things on social media about males or “white people” that is almost unbelievable. A few months back I saw a friend of someone I knew proudly admit she voted primarily “non-white” and “non-male”:

Martin Luther King fought for the day in which people were judged not based on the color of their skin, or their ethnicity, race or sexual orientation, but by the content of their character. Seeing people as individuals has been the cornerstone of peace across the globe and contributed to the overwhelming success of western democracies. Following a set of common morals, ideals and values is what keeps a civilized society together. We have regressed into a form of tribal identity, where it has become less about the merit of your ideas or how you conduct yourself and more about what you are or the identity group that you are part of – “identity politics”. Identity politics is focused on racial, ethnic, and sexual identity — aspects of identity that place you somewhere in the hierarchy of “intersectionality”. Your identity determines where you fall in the hierarchy of intersectionality. If you are a straight white male, you happen to land at the very bottom of the totem pole. You are part of the patriarchy and come from a long line of oppressors. These ideas are dangerous. They cause growing extremism on both sides of the isle and are destined to divide us.

Solving this issue will require several things. One place to start is with the primary schools and universities, where many of the teachers are spewing these destructive narratives.

Take a look at this quick video which discussed this topic in more detail:

Not only are 18 million boys not growing up without a father, but many do not have a male presence even when going to school. Overall, about 77% of teachers are women. In primary schools, nearly 9 in 10 teachers are women. This is causing sever consequences and its not good for women either.

Stay tuned for another article in which I actually dispel myths like “The Gender Wage Gap” and take on larger ideas like “The Patriarchy”.