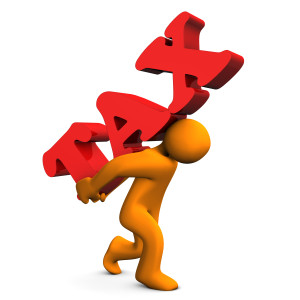 Add up all of your taxes…and you may be in for quite a surprise.

I think that’s most of mine. Total percentage? 39%.

Americans are slaving away 4.8 months, or 40% of this year to fulfill the government’s voracious appetite for confiscatory taxes, corrupt bailouts and wasteful stimulus efforts. The income tax is one of the most egregious encroachments on our liberties today. It is a form of involuntary servitude, which was supposed to have been outlawed by the 13th Amendment. The income tax is immoral on many levels. It permits the government nearly unlimited access to the people’s wealth. It opens the door to inquisitorial intrusion into their private affairs. And it introduces such complexity into the law that everyone is a potential criminal. The 16th amendment which calls for taxes was never ratified by the states. The harmful effects of the income tax are obvious. First and foremost, it has enabled government to expand far beyond its proper constitutional limits, regulating virtually every aspect of our lives. It has given government a claim on our lives and work, destroying our privacy in the process. It takes billions of dollars out of the legitimate private economy, with most Americans giving more than a third of everything they make to the federal government. This economic drain destroys jobs and penalizes productive behavior. The ridiculous complexity of the tax laws makes compliance a nightmare for both individuals and businesses. All things considered, our Founders would be dismayed by the income tax mess and the tragic loss of liberty which results. We need to abolish the income tax and the welfare, entitlement system.

How Do We Collect Taxes If We Abolish the IRS? How Do We Pay For Vital Government Programs?
Before we abolish the IRS, we first need to make significant cuts in spending. The way the government would receive taxes would be through INdirect taxes like when you buy something. These are known as excise taxes. Also non-protectionist tariffs are another way to receive revenue – these are tax on imports and exports. Excise taxes, fees, and corporate taxes already account for about 55% of all federal revenue. We simply don’t need the other 45%.

We currently spend over $1 trillion every year just on maintaining our troops and bases throughout the rest of the world. Our taxpayer money has been used to bail out big banks, huge car companies, bailing out government housing programs and on huge stimulus bills that have done absolutely nothing to stimulate our economy. There is no better economic stimulus than letting people keep their money and spend it how they see fit. $4 trillion of US taxpayer money was wasted on the wars in Iraq and Afghanistan, a war where there were no weapons of mass destruction and our national security was never threatened. We are more than $16 trillion in debt! How in the world has the income tax helped us? The more we spend, the more taxes we need. Spend less, you don’t need as many taxes, including the income tax.

We CANNOT cut out the income tax if we want a welfare system, if you want the entitlement system to continue, if you want corporate welfare, the military industrial complex and foreign adventurism and policing the world. In fact, not only do you need the income tax, you need to borrow, you need to print the money which is exactly what we are doing now. It’s an attitude about government and I think the most important question that we have to ask, is what should the role of government be?

The founders asked that question, they didn’t like the role of the King and they changed it and tried to give us a document, they made an effort to try to restrain us from going back to these old habits again and that’s the question we have to answer. If we had the proper role of government, if we just basically follow the constitution, we wouldn’t even have to have an income tax at all. We would live within our means and we wouldn’t be able to print money and we wouldn’t be able to borrow like we do.

An income tax is the most degrading and totalitarian of all possible taxes. Its implementation wrongly suggests that the government owns the lives and labor of the citizens it is supposed to represent. Tellingly, “a heavy progressive or graduated income tax” is Plank #2 of the Communist Manifesto, which was written by Karl Marx and Friedrich Engels and first published in 1848.

Could America Exist Without an Income Tax?
The idea seems radical, yet in truth America did just fine without a federal income tax for the first 126 years of its history. Prior to 1913, the government operated with revenues raised through tariffs, excise taxes, and property taxes, without ever touching a worker’s paycheck. In the late 1800s, when Congress first attempted to impose an income tax, the notion of taxing a citizen’s hard work was considered radical! Public outcry ensued; more importantly, the Supreme Court ruled the income tax unconstitutional. Only with passage of the 16th Amendment did Congress gain the ability to tax the productive endeavors of its citizens.

Every time the federal reserve prints money, not only does it force us even deeper in debt, but it devalues the dollar and creates inflation which is the silent thief that robs your money every year. This devaluating in the dollar pisses off countries that are investing it it, namely china. The federal reserve banks don’t loan. They aren’t banks; they’re really an overpaid, powerful, private accounting service which is helping to not so slowly bankrupt this country.

Americans have been bred to a welfare dependent mentality. Special interest groups who have no interest in the U.S. Constitution, demand that billions of dollars be spent on their pet interests. Billions upon billions of dollars have been unconstitutionally thrown to foreign governments, some days our friend, a week later our enemies. They are only our friend as long as the U.S. throws money at their corrupt governments.

As long as we continue to condone unconstitutional spending by Congress, the longer they will violate their oath of office, and continue to fund unconstitutional expenditures, placing the next generations in a state of un payable, massive debt. A “balanced budget” is nothing more than good political rhetoric, but in reality, it’s a pipe dream strictly for public consumption. How can you balance your budget if you have no money to spend and are trillions of dollars in the hole? You can’t. It’s just another well crafted illusion to keep the masses pacified. You can fool some of the people some of the time, but the American people have awakened to this monumental theft and are demanding the only real solution that can be implemented: Abolishing the central bank, and a return to a constitutional monetary system with no income tax.
In 1832 andrew jackson fought against a similar “central bank” and now the white house actually admits on their website that it was “a private corporation but virtually a Government sponsored monopoly”. This can be found here about half way down the page: http://www.whitehouse.gov/about/presidents/andrewjackson/. The federal reserve bank is no different.

Do your own research. Don’t believe what the mainstream media tells you. They are owned by corporations that greatly benefit from the current system.