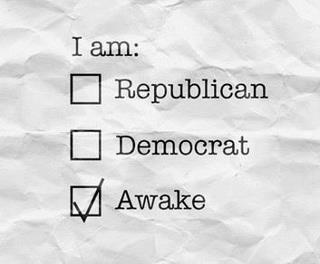 Every year we are told this is the most important election of our time.

Every year we are told that we can’t allow (insert name here) to win.

Every year we are told there is a major difference between the two parties, when the same policies continue of perpetual spending, endless debt, war and central planning.

Every year the same big banks and big corporations donate to both political parties.

Every year we are promised by both sides all the things that politicians say they will do for us.

And every year the majority of the country continues to believe the false paradigm of left vs right:

This false dichotomy creates a barrier which separates us and divides us from what we know is the truth: LOVE. The majority of us want the same things. We want peace. We want people to have enough and to live lives without terrible struggle and despair. We want the economy to thrive and business to flourish. Yet no one wonders how is it possible that we have half on one side and half on the other? In a country that is 240 years old, with over 300 million people, we should have dozens and dozens of choices to choose from, AND WE DO!! We need this because there are many different ways of getting to the same place. But please think about how it is possible, that people think they have to choose between only TWO, especially when they are almost the identical choice on all of the most important issues. They pick one of them like some sort of sports team. Instead of allowing their choices to be guided by a simple set of simple principles (non-aggression for example) they vote based on emotions or political ideology.

The only way that peace will flourish is when people are willing to look at the truth: no one owes us anything. As long as we continue to believe something is due to us, many of us will continue to use the power of government to deny each other freedom and it will grow larger and larger and more powerful. It is like feeding a beast. Because of this, whips and chains have been replaced by the income tax, which forces millions of people to work at least 3 months of the year for nothing. Ownership is taken of their labor and then it is determined how much of it they are allowed to keep. It is true madness to not protest against this reprehensible act, but to actually endorse it, really is the definition of insanity. Only in a world completely flipped upside down can this behavior actually be seen and disguised somehow as being compassionate. Only in an upside down world, can this policy be endorsed by BOTH parties. Every year, I watch candidate after candidate perpetuating the division between us, by telling us all of the things we are entitled to and all of the people that have wronged us. Remember that a true leader creates an atmosphere of unity, peace and cohesiveness.

I implore you to please not vote for the same two authoritarian war parties, both of whom endorse the system of violence and aggression. Please, please stop voting for the two-party system.

Thank you for taking the time to read this. Please also watch the video on my homepage. Peace will never flourish when people use the power of government to deny each other freedom.