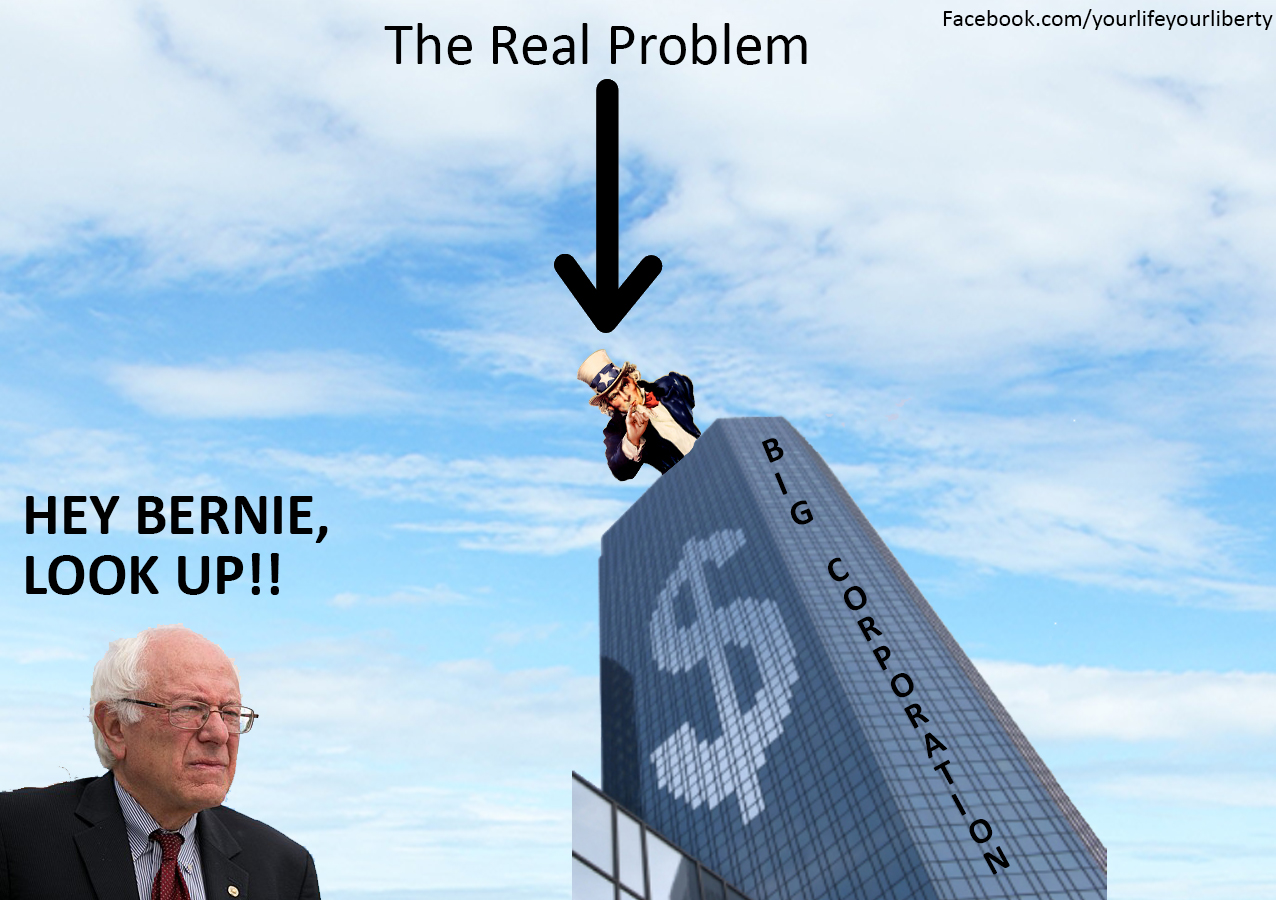 Bernie Sanders supporters seem to be everywhere. Many of his supporters are intelligent people who are sick of the corruption and greed they are seeing and know something needs to change. Understandably, they like him because he is one of the few politicians that actually talks about it. And he is right. Well, HALF right. One cannot lay the blame solely on the corporations or the people who run them. The government is the institution that actually EMPOWERS them. As government grows and continues to expand with more and more power over our lives, so grows the opportunity for large corporations to petition government, which only further expands the ultra-wealthy’s power, control and influence.

There is a renewed interest in socialism in this country, as if putting the word “democratic” in front of it makes it somehow unique. No matter how it is wrapped, socialism is still the belief that we can raise people out of poverty by taking money out of the hands of those who have learned how to produce. And it has never worked. Yes many of the people in the Nordic countries say they are happier, but its not because of socialism.

Taking money away from people who have figured out a way to produce a viable good or service and then giving the money to people who will do nothing but spend it, does not and can never, create economic growth and prosperity. Savings and investment drive production and production is what drives consumption. Real economic growth involves people taking on risk and actually creating something productive. Taking money from one hand and putting it in the other, does absolutely nothing to grow the economy – it is simply moving the same money around. These ideas are completely flawed and unsound.  The idea that there is only a certain amount of money to go around and we need someone to re-distribute it so it is more evenly dispersed, is totally misguided. If there is only one fixed amount of money to go around, then how did we go from about 3 million people since our country was founded in 1776, to 300 million?

True capitalism (what we have now is a far cry from it) produces real economic growth and the most amount of prosperity for the greatest number of people. It doesn’t come from some command and control bureaucracy that steals the money from society’s producers and then re-distributes the goodies to the rest. Socialism always fails because at some point people realize they don’t have to work as hard to get the same amount of stuff. It takes all the incentive away to really succeed.

49% of Democrats now have a favorable view towards socialism. This is scary. And sad. All of the economic and productivity advancements we have seen are all the result of someone being willing to take risks. ‘Oh no,’ you say, ‘we only want to steal money from the “rich”. Really? Take a look at how we live in this country compared to the rest of the world. To them, we are ALL rich! Is it ok for other, more impoverished countries to steal 90% of our wealth so we are forced to pay OUR “fair share”?

What does it really mean to say that some people should pay 90% tax? It means you believe that it is acceptable for the government to take 90% of everything you earn. ‘No, but we are only punishing the super rich – the people making millions every year!‘ Wrong again. The super rich have dozens of tax attorneys and financial planners that make sure that their wealth is hidden. They don’t show their money through the income tax. Most of the money they earn is a result of tax free municipal bonds and other investments as a way to shelter the money from taxation. Income taxes don’t reach the super rich because they don’t earn their money in income.

So who does it really hurt?  It hurts the people who are running small businesses who are trying to grow it, so they can employ more people. A successful small business owner may report $200,000 profit on his income taxes and he is considered “rich,” as he is in the top percentile. After all the risk he has taken on, all the debt, all the people he employs (including the contractors he paid to get to where he is) he finally starts to reap the rewards of his years of dedication, effort and hard work and now we should punish him for his success? When we take the majority of his income away, he now has less money to re-invest in his business. That means his business doesn’t grow or takes much longer to grow, which means it takes that much longer for him to hire more people. He is less productive and we are making it harder for him to succeed. He makes good money, but its not enough to have a team of tax attorneys and multiple tax shelters like the big boys controlling the politicians. These policies are therefore actually protecting the super rich, as they make it more difficult for the small business owner to become really rich themselves – it prevents competition.

Those at the top also get the government to work for them by passing legislation to keep out competitors. They don’t just do this through lobbyists. They do it by getting top executives IN to government itself! Case in point: Monsanto. The former Monsanto vice president, Michael R. Taylor is now running the FDA. Taylor spent years lobbying for the GMO Foods giant. The commissioner position he now holds at the FDA, affords Taylor the ability to sign off of any cancer-causing, harmful agent produced by Monsanto. In this way, no more expensive lobbyists are needed and one doesn’t need money to influence the legislators, because they ARE now the legislator!  Whoever wins the next election is meaningless because Monsanto’s interests will be served.

Today, we live in an economic and political system controlled by corporations or corporate interests; a merger of state and corporate power if you will. The original point behind government providing a watchdog over industry – was to keep the playing fields equal – between players and owners. Those days are long gone. Government is now part of most industries and those industries are part of government. As the federal government has progressively become larger over the decades, every significant introduction of government regulation, taxation, and spending has been to the benefit of some big business. It used to be against the law for a corporation to contribute to a political party. Now these corporations spend more on lobbyists than they pay in taxes. We now live in a system where corporations can legally purchase politicians through unlimited, undisclosed campaign donations.

The United States is not ruled by a single deranged dictator but by an impersonal corporatocracy. Thus, there is no one tyrant that Americans can first hate and then finally overthrow so as to end senseless wars and economic injustices. Revolutions against Qaddafi-type tyrants require enormous physical courage. We all need to wake up and see that we Americans have neither a democracy nor a republic and are in fact ruled by a partnership of “too-big-to-fail” corporations, the extremely wealthy elite and corporate-collaborator government officials.  Americans must surgically remove the corporate cancer from government through direct action like voting out the statists and cultivating new leaders from within the movement. If we want to solve the issues of corruption, we must start at the source by electing representatives who will reduce the size, scope and power of the functions of government. 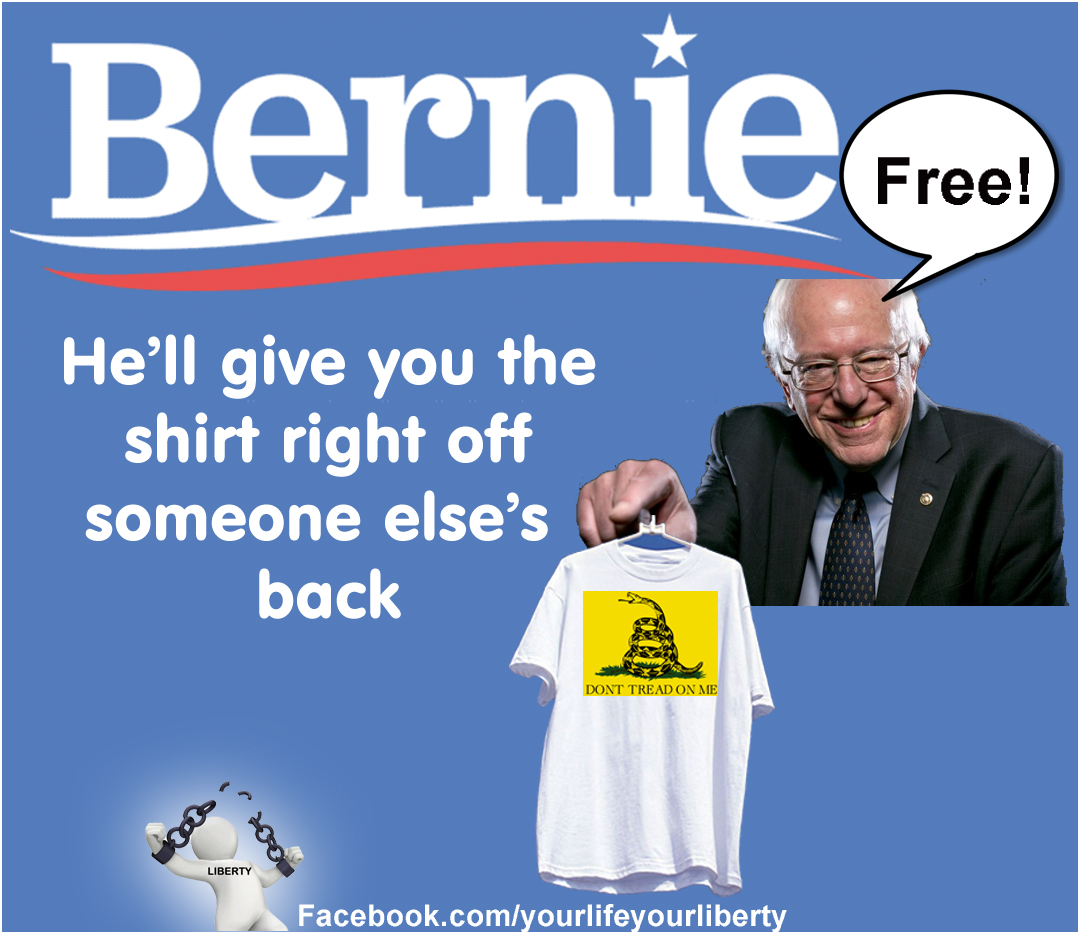