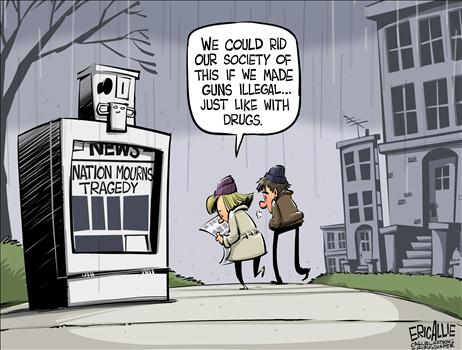 People think the government wants to enact yet more legislation (gun control laws) because they care about the American public’s safety. That’s a good one.

Since when did our government start caring about the best interests of the American people?

Are we talking about the same government:

More legislation has little to do with protecting the public and everything to do with slowly creating a totalitarian type of police-state. And if you think that is an exaggeration you haven’t been paying attention —mainly to the destruction of our constitutional rights and civil liberties.In a free society:
These are not the conditions we are currently living in. In fact, we have all of the makings of fascism already in place:

Some think they should make a law that bans “assault” weapons. Our government currently has this same line of thinking with drugs – dont take all of the drugs away – people need some drugs like prescription “legal” drugs, we only need to take away the “bad” drugs like heroin or cocaine. Has this worked? Nope. 10% of the U.S. population uses illegal drugs. Ooops! That didnt work. So what do we do to combat people from making their own choices about what to put in their bodies? We throw them in prison. Half of the people in our prisons are there for drug related offenses. In fact, we are living in a country that has the highest incarceration rates in the world (25 percent of prison inmates in the world are locked up in the U.S). Whats more shocking is how many of those are locked up in solitary confinement (a form of torture). Studies now show that, all told, 80,000 U.S. prisoners are locked up in solitary on any given day. That’s as many tortured people as the entire prison system of Germany, or of England, Scotland and Wales, combined.

How many people die from legal drugs? An estimated 106,000 people die from adverse drug effects from LEGAL drugs every year, and approximately 98,000 die annually from some sort of error by medical staff. Four times more people die from bad medical care than from firearm deaths. Where is the outrage for prescription drug deaths? Or errors from doctors? Where are the calls for more legislation for that? Every major shooter of similar circumstance and scenario had been on similar drugs including the Columbine shooters, Ted Kaczinski the Unabomber’, and many others, it was easy to see that Adam Lanza fit the bill as well. Where is the outrage at all of the psychotropic medications that are being crammed down our children’s throats who make them want to kill people?Here’s the thing about making more laws – criminals dont follow them. That’s why they are called criminals. People who kill small children at an elementary school are psychotic. They definitely dont follow laws. 3% of the population is psychotic. And a small percentage of those people want to do actual physical harm to others. So we are talking about less than a half of a half percent of all people. So we are attempting to enact yet more legislation to protect us from .020% of the population? Anyway, would that even work? One thing we do know about people – if they really want something, they will find a way to get it.The government’s role is simple, to protect liberty. Their job is not to attempt to protect us from every lunatic walking the streets. Will we keep enacting laws until we feel totally safe? How many laws will that take? Check out the chart below. Have many of the pro “ban” people know that 20 times more people are killed by handguns than “assault” weapons, yet I dont see these people saying we should also ban handguns? Do they not want to attempt to save the lives of people that die from handguns as well? 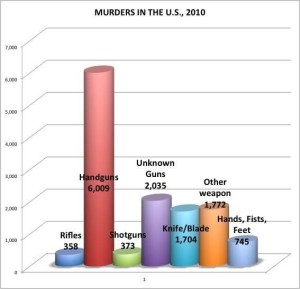 FBI data suggests that the average American is more likely to be killed by “hands, fists” or “feet” than a rifle. Does that make you feel unsafe? Then, maybe we should ban people from making a fist? Here’s the most ironic part of it all. In the 20th century, more people have died by the hands of their own government THAN ALL WARS COMBINED. How about we ban governments acts of aggression against its on citizens? That would have saved over 175 million people this century.