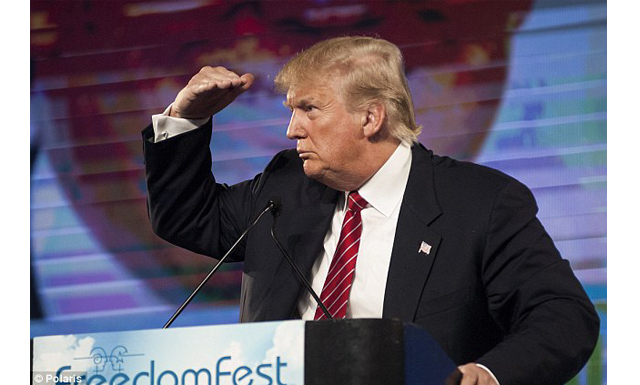 After seeing more than a few “liberty” supporters standing behind Donald Trump, I felt compelled to write a piece addressing if he is truly a supporter of individual rights and the state not intervening in human volition and human cooperation.

The job of a true leader is to stay out of the way and allow people to live their lives as they see fit and to protect this right. If they are going “to do” something, it should be to unify people instead of dividing them, to create an atmosphere of peace. They should be there solely to prevent anyone (including the government that they represent) from infringing upon the rights of its citizens.

1) Trump has stated that he will kill the families of “terrorists”. He is flat out saying he will kill innocent woman and children.
2) He stated he would “definitely” force all Muslims in the United States to register in a database and he was to prevent all Muslims from entering the United States.
3) We all know that eminent domain is when the government seizes private land for development projects. Trump thinks it is “wonderful”
4) Trump supports reauthorizing the Patriot Act and NSA Metadata Collection
5) Trump stated that he could pull out a gun and shoot someone and his supporters wouldn’t care.
6) Sarah Palin endorsed him.

Here are more of his positions on the issues and how they are contrasted with libertarian principles:

National Security
Mr. Trump likes tough talk and seems to think that wars are an effective solution to many of our problems. Libertarians think that wars often create more problems than they solve, are bankrupting our nation, and that violence is only justified when used for defense.

Foreign Policy
Mr. Trump advocates more sanctions on Iran, more support for Israel, and being tough all around. Libertarians think the United States should both avoid entangling alliances and abandon its attempts to act as policeman for the world.

Trade
Mr. Trump thinks that foreign countries are getting the better end of trade deals and says that he would negotiate more favorable deals. Libertarians support free trade and think that U.S. citizens and businesses should be allowed to negotiate the deals that they find favorable without the interference of the U.S. government and government officials.

Healthcare
Fifteen years ago Mr. Trump claimed he was for a government run single-payer Canadian-style healthcare system. Mr. Trump now says Obamacare is ineffective and should be repealed and replaced, but he’s not specific. Libertarians have always opposed government run healthcare, and support a free market.

Immigration
Mr. Trump advocates building a wall along our Southern border and has said disparaging things about immigrants. Libertarians believe that people should be able to travel peacefully across borders to work, trade, or live.

Eminent Domain
Mr. Trump has taken advantage of eminent domain laws to build his real-estate empire. Libertarians think that eminent domain is often exploited by the wealthy at the cost of average Americans and is a violation of our most basic rights.

Gay Marriage
Mr. Trump also has said that he thinks that gay marriage is an issue for the states. Libertarians think that the government has no business regulating anyone’s marriage.

Justice System
Mr. Trump says he would be tough on crime via anti-crime policies. Libertarians also want to decrease crime but likely disagree with Mr. Trump on the nature of “crime.” Libertarians are careful to differentiate between violent crimes and non-violent crimes, and also between crimes which involve a victim and those that do not. Currently, a huge percentage of our prison population is imprisoned for non-violent, victimless crimes such as marijuana use. Libertarians think that this is unjust to everyone: the taxpayer, the incarcerated, and society more broadly. Prison should be reserved for violent criminals.

Education
Mr. Trump has stated that he is against Common Core and supports school-choice. Most Libertarians would agree. Libertarians think that the federal government should not have the authority to dictate to Americans how we should educate our children.

2nd Amendment
Mr. Trump has said that he is against limits on Americans’ 2nd Amendment Rights, but has supported the ban on so-called assault weapons and longer waiting periods to buy guns. Libertarians oppose all laws at any level of government that attempt to restrict, register, or monitor the ownership, manufacture, or transfer of firearms or ammunition.

Donald Trump as a dangerous authoritarian on a power trip who won’t value civil liberties. Peace will never flourish when people seek the power of government to deny one another freedom.

There is a growing movement of people worldwide, who no longer accept the current paradigm of governmental coercion and violence and instead believe in a society based on voluntary, mutual consent. For more on the ideals and principles of peace and liberty, see my video here.